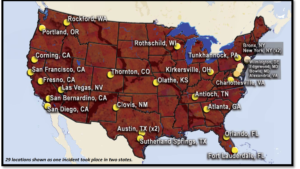 Map of 29 mass shootings in 2017 examined by secret service

This study focused on 28 incidents in 2017, in which three or more persons were harmed and were carried out in public places within the United States. This seems to confirm the findings of Mother Jones which has been maintaining a database of mass shootings and found the mentally ill were disproportionately represented among the perpetrators. It is time for those in the mental health industry to recognize that leaving the seriously mentally ill untreated does cause a spike in violence, rather than denying that violence is associated with mental illness.

A PDF of the seven page  report is at https://mentalillnesspolicy.org/wp-content/uploads/secret_service_64_attacks_MI.pdf (March, 2018)