Funds for Treating Individuals with Mental Illness: Is Your State Naughty or Nice?

The most generous states for mental health are Maine, Pennsylvania and Arizona.  The stingiest states are Arkansas, West Virginia, Idaho, Kentucky, Oklahoma, Louisiana and Delaware.

(New York, NY, December 12, 2017) Mental Illness Policy Org released the first study to rank all fifty states based on the percentage of state-controlled funds each state spends on mental illness. States that spend a higher percentage of their budget on mental illness are ranked as generous and those that spend a lower percentage are ranked as stingy. This study found the most generous states in mental health spending are Maine, Pennsylvania and Arizona. The stingiest states are Arkansas, West Virginia, Idaho, Kentucky, Oklahoma, Louisiana and Delaware. The most generous states, Maine and Pennsylvania (5.6%), allocates eight times more as a percentage of total state spending than the stingiest state, Arkansas (.7%). 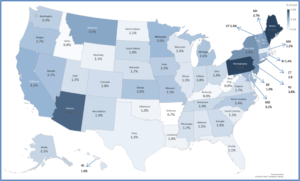 Reports by others that have ranked states based on total mental health spending or per-capita spending do not allow an accurate comparison of states commitment to mental health services relative to a states overall spending because they fail to account for the fact that richer states have more to spend. “Funds for Treating Individuals with Mental Illness: Is Your State Generous or Stingy?” was researched by DJ Jaffe, executive director of Mental Illness Policy Org and author of Insane Consequences: How the Mental Health Industry Fails the Mentally Ill and Dr. E. Fuller Torrey, founder of the Treatment Advocacy Center. Mr. Jaffe said that “this report describes which states have been ‘naughty or nice’ to the mentally ill.”

Equally important as the percentage of funds allocated to mental health services is whether the states allocate the funds effectively. Jaffe said that “New York and California allocate a respectable proportion of their budgets to mental health, but New York and California waste the funds on programs that do not help persons with serious mental illness.”

The authors urge legislators to allocate a higher percentage of their state budgets to mental health services and insure the funds are allocated to programs proven to reduce meaningful metrics including homelessness, arrest, incarceration, hospitalization and suicide in people with serious mental illness. The full report is available at  https://mentalillnesspolicy.org/national-studies/funds-for-mental-illness-is-your-state-generous-or-stingy-report-pdf.html