SAMHSA ignores own research on Stigma

SAMHSA and the entities they fund have made ‘fighting stigma’ a major focus. SAMHSA conducted research on why people do not receive treatment and stigma is only a tiny part of that. Much more significant barriers were cost (another way of saying treatment not available) and failure to recognize need for treatment, inefficacy of treatment. SAMHSA and the entities they fund also point to ‘fear of commitment’ as being a major reason people don’t seek care. Again, their own research shows that is minor. If stigma were an important reason people don’t get care, then as Dr. E. Fuller Torrey has written, the best way to reduce stigma is to reduce violence by people with untreated serious mental illness. It is violence by this small minority that tars the non-violent majority. 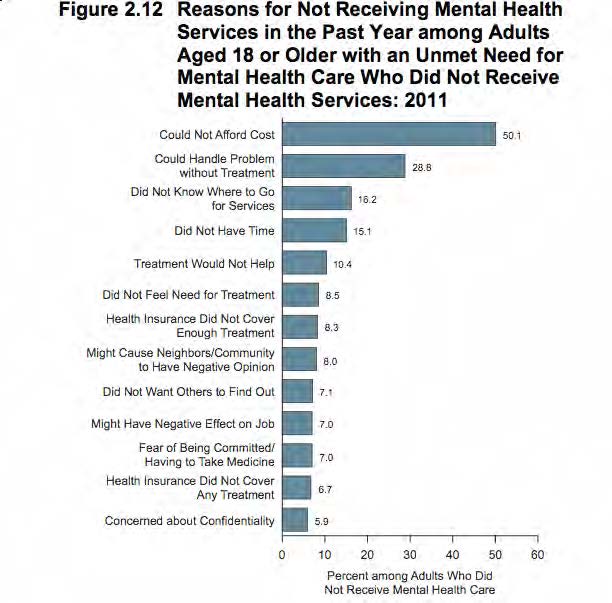 Source of chart: Results from the 2011 National Survey on Drug Use and Health: Mental Health Findings. US Dept. HHS, SAMHSA, Center for Behavioral Health Statistics and Quality. Avail at http://www.samhsa.gov/data/NSDUH/2k11MH_FindingsandDetTables/

DJ Jaffe is Executive Director of the non-partisan Mental Illness Policy Org., and author of Insane Consequences: How the Mental Health Industry Fails the Mentally Ill. He is a critic of the mental health industry for ignoring the seriously ill, and has been advocating for better treatment for individuals with serious mental illness for over 30 years. He has written op-eds on the intersection of mental health and criminal justice policy for the New York Times, Wall St. Journal and the Washington Post. New York Magazine has credited him with being the driving force behind the passage of New York’s Kendra’s Law and Congress incorporated ideas proposed by DJ in the Helping Families in Mental Health Crisis Act.
Share This Page:
Share on Facebook Share
Share on TwitterTweet
Share on Google Plus Share
Share on LinkedIn Share
Send email Mail
Print Print
Page load link
Go to Top