I spent the first fifteen years after my family member developed schizophrenia repeating what had been passed down to me from other mental health advocates, often during Mental Health Awareness Month. I’ve spent the second fifteen years recognizing it was all wrong.

What advocates taught me was based in political correctness, not science. They created an alternative reality, often repeated by the press, where everyone with a “mental health condition” is resilient, recovers, goes to work, and can live independently. That may be true for many of the 20% of adults who have some sort of something that’s in the D.S.M., but it is not true for many of the 4% who have serious mental illnesses including schizophrenia and severe bipolar disorder.

The disconnect between the narrative being created by mental health advocates and my own ill family member’s experience was so striking that I started Mental Illness Policy Org and wrote Insane Consequences: How the Mental Health Industry Fails the Mentally Ill arguing that the reason people with serious mental illness like my own sister-in-law can’t get treatment is because the mental health industry is misleading policy makers. And as I’ve traveled the country speaking about my book to other families of the seriously mentally ill, I’ve learned I’m not alone in believing that.

During Mental Health Awareness Month, I was taught by mental health advocates that the mentally ill are no more violent than others. That didn’t jibe with what I was seeing with my own eyes.  So I looked at the data for myself. I found that many of the studies claiming the mentally were no more violent were of those “in the community” thereby excluding those who were in hospitals, jails and prisons or were homeless or had taken their own life. If you eliminate the seriously mentally ill and the violent, you do find the remainder are neither.

Violence-denying studies are usually of the treated. Those studies only show that treatment works. They don’t show whether mental illness itself is associated with violence. To answer, that, one must study the untreated seriously mentally ill and those studies show they are more violent. The advocates themselves know this but refuse to acknowledge it. They know psychiatric units are locked and cancer units are not; they  know nurses who work in psychiatric units wear panic buttons that those in liver units don’t need. They  know we train police to deal with the mentally ill not those with psoriasis. They know outreach workers go out in pairs for their own safety. And yet they still claim the mentally ill are no more violent. And because advocates won’t admit to violence, politicians won’t take steps to reduce it. Politicians won’t supplement civil commitment laws that require individuals with serious mental illness to become “danger to self or others” with laws that prevent them from becoming dangerous. They won’t make greater use of Assisted Outpatient Treatment which has reduced violence to self and violence to others in half.

Advocates used Mental Health Awareness Month to teach me that if we intervene early, we can prevent mental illness. But when I looked at the research, I found that serious mental illness can’t be prevented. We don’t know the cause. In fact, there will likely be a Nobel Prize to whoever figures out how to prevent it. We can prevent progression of illness, but that means treating people with it, not those without it. First Episode Psychosis programs are not preventing mental illness, they are preventing progression of the illness in people who already have it. The more we talk about preventing the illness itself, the more we encourage politicians to spend money on people without mental illness, rather than those with it.

During Mental Health Awareness Month, advocates taught me that we should invest more in preventing suicide in kids because it’s the second leading cause of death in those under twenty-four. But looking at the data, I found the bulk of suicide is in adults over 50. The advocates are encouraging politicians to spend suicide funds where suicide isn’t: on kids. So it is likely more adults are dying. I also found that we really don’t know how to prevent suicide.

Advocates teach the public that closing psychiatric hospitals and moving people into the community is more humane and reduced institutionalization. But looking at the data in Figure 1 below, it is clear that closing psychiatric hospitals didn’t reduce institutionalization.  It simply moved the most seriously ill out of hospitals into even more inhumane jails and prisons, shelters and homeless camps. 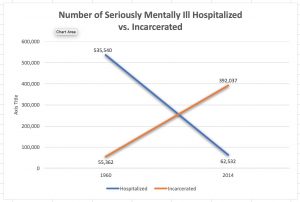 I was taught to support programs that were “evidence-based.” Then I found, as James Coyne said, “Evidence-based is too often an ill-gotten branding, based on weak evidence, created by promoters of treatment who want us to ignore their conflicts of interest.” For example, suicide programs claim success based on number of calls to a helpline, not number of suicides, which are going up. Outreach programs were claiming success based on number of people contacted, not whether any got treatment. Mental Health First Aid (MHFA) claims success because it makes people who take the course feel better about their skills sets, but research shows MHFA doesn’t help people with mental illness. Peer support studies claim success because they compared adding peer support to adding nothing. Would patients do better if we added a professional who wasn’t a peer? You have to know that before you can claim it’s ‘evidence-based.’

Advocates use Mental Health Awareness Month to teach people that there is stigma to having a mental illness. But schizophrenia and bipolar disorder are real biologically based illness. You don’t cause your own mental illness. It is not a “mark of shame.” Stigma is not even a major barrier to care. My own experience, and those of peers and family members I’ve met taught me that the biggest barrier to care is the lack of services. The lack of psychiatrists, case managers, housing, clubhouse programs and transportation options are far greater barriers to care than stigma. The reason those shortages exist is because public policy discriminates against the mentally ill. We should work to end the discriminatory policies that create those shortages. Fighting stigma has become the black hole of advocacy diverting thousands of advocates away from fighting for real change.

Advocates like to say every person with mental illness should self direct their own care. But 40% of the seriously ill have anosognosia. They are so ill they don’t know they are ill and therefore many reject treatment. Treating them, involuntarily if need be, can restore their free will.

How did Mental Health Awareness Month become so counterproductive? How did my fellow mental health advocates become so wrong? They simply erased the seriously ill from their narrative. If you erase the seriously ill, you do find the remainder are no more violent, everyone recovers and can live independently, we don’t need hospitals and everyone should self-direct their own care. But that’s not the world my seriously mentally ill family member lives in. Mental health advocates do a great disservice when they use Mental Health Awareness Month to deny her existence. (5/12/19)